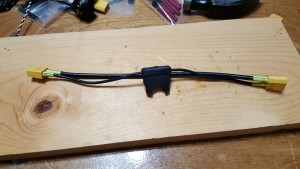 I found the idea for this at the propwashed site – a site that I found very helpful as I was doing this first quad build.  Basically, the idea is that if you’re not using the motors on the quad, the power draw should be less than about 3 amps (and I’m guessing significantly less than that really).  However, if you have some sort of short due to bad wiring or soldering, you would get a sudden load of much higher than that.  The idea here is to that you put a 3A auto fuse into an auto fuse holder, and then connect this between your batter and the quad copter.  If something is wrong and it pulls more than 3 amps, then hopefully the fuse will blow before you damage the electronics.  I don’t have any pictures of me using this, but the first time I connected the quad to the battery, I did have this in place.